A year passes with the hotel industry having solid but unspectacular performance. That is probably a good thing in comparison to what many prognosticators predicted. It appears that strategy and execution were the best predictors of performance. Companies that executed poorly got penalized, just look at Red Lion. Greg Mount was one of the top performing CEOs in 2018 but 2019 was not so kind. In contrast, RMR and Ashford has changes in strategy that had legs. We predict that 2020 will be another “down in the trenches” year as investors watch the economy and the presidential election very carefully.

What we have found over the twenty-plus years of studying CEO pay, that boards are still challenged with linking CEO pay to company performance. In fact, that was the goal of creating our pay-for-performance model. The AETHOS Pay-for-Performance Model analyzes key financial metrics such as market capitalization, stock appreciation, EBITDA growth, and total direct compensation. What did we glean from last year’s hotel industry performance? Big companies outperformed their smaller brethren and REITs were on the sidelines.

Size matters in public markets. The associated costs of running a public company are significant and favor the bigger players. The market capitalization of our peer group ranged from Walt Disney’s colossal $256B to InnSuites’ paltry $13M. Comparing CEOs from two vastly different companies might appear difficult, but that is precisely what the our pay model intends to do. In fact, it illustrated that Bob Iger at Disney generally merited his huge $65M paycheck, while James Wirth at InnSuites barely deserved his $130K paycheck. In the end, investors want stock performance not payroll containment.

As in previous years, the highest paid CEOs in the industry ran the largest companies. The top ten CEOs each earned more than $8M in total compensation, with Bob Iger topping the list at $65M. Frank Del Rio at NCL racked up nearly $22M and Glenn Fogel at Booking earning just over $20M. Although their pay packages were significant, all of these CEOs had an AETHOS Value Index (AVI) over 80; 100 would be a perfect pay-for-performance match. This year’s top performing CEO based on the model was Adam Portnoy at RMR Group with an AVI of 205. Monty Bennett, Greg Marcus and Warren Haruki rounded out the top five.

Seven CEOs in the hospitality industry received a base salary of $1M or more. Bob Iger topped the list with a salary of nearly $2.9M, followed by Frank Del Rio at $1.75M. Many of these same CEOs received hefty bonuses, with Iger taking home a $18M bonus, followed by Mark Hoplamazian from Hyatt at $8.6M. The average salary for the group was $850K, while the average bonus was $2.4M Interesting to see a three times multiple between the two.

Like the CEOs in the Fortune 500, long-term incentives plans were a significant portion of overall CEO pay in the hotel industry at about 60% of total compensation. Most LTIPs were in the form of restricted stock grants and to a lesser extent, stock options. The largest stock grant went to Iger, with a grant value of just over $43M; followed by Chris Nassetta of Hilton at $16M. Twenty-nine of the thirty-five CEOs on the list had multi-million dollar LTIP grants. We continue to see more LTIP awards having performance vesting as shareholders want to see metrics hit before vesting occurs.

Interestingly, I discussed the issue of income equality in last year’s article and it appears that a Disney heir caused a stir discussing the matter. Abigail Disney in a series of tweets, condemning Bob Iger’s pay for having “deepened wealth inequality”, making $65.6m in 2018 – 1,424 times the median salary of a Disney employee. While she called his pay “insane”, I believe the issues are separate but emotionally connected. Putting a dollar value on anyone’s work is not easy. Is an actor worth $45M a movie; is someone worth $350M for throwing a baseball or dunking a basketball? Is an Army private only worth $20K a year?

In a free market system, I believe that you get paid what someone is willing to pay you. It comes down to supply and demand. Ms. Disney can give away her inheritance, which she clearly did not earn, but that is her choice. Taxation is another way to address income equality, but government is typically a poor arbiter of value creation and fairness. In the meantime, hotel CEOs will get graded on how well they deliver on their strategy. I also predict that more companies will go private as investors and CEOs look to get out of the public spotlight. 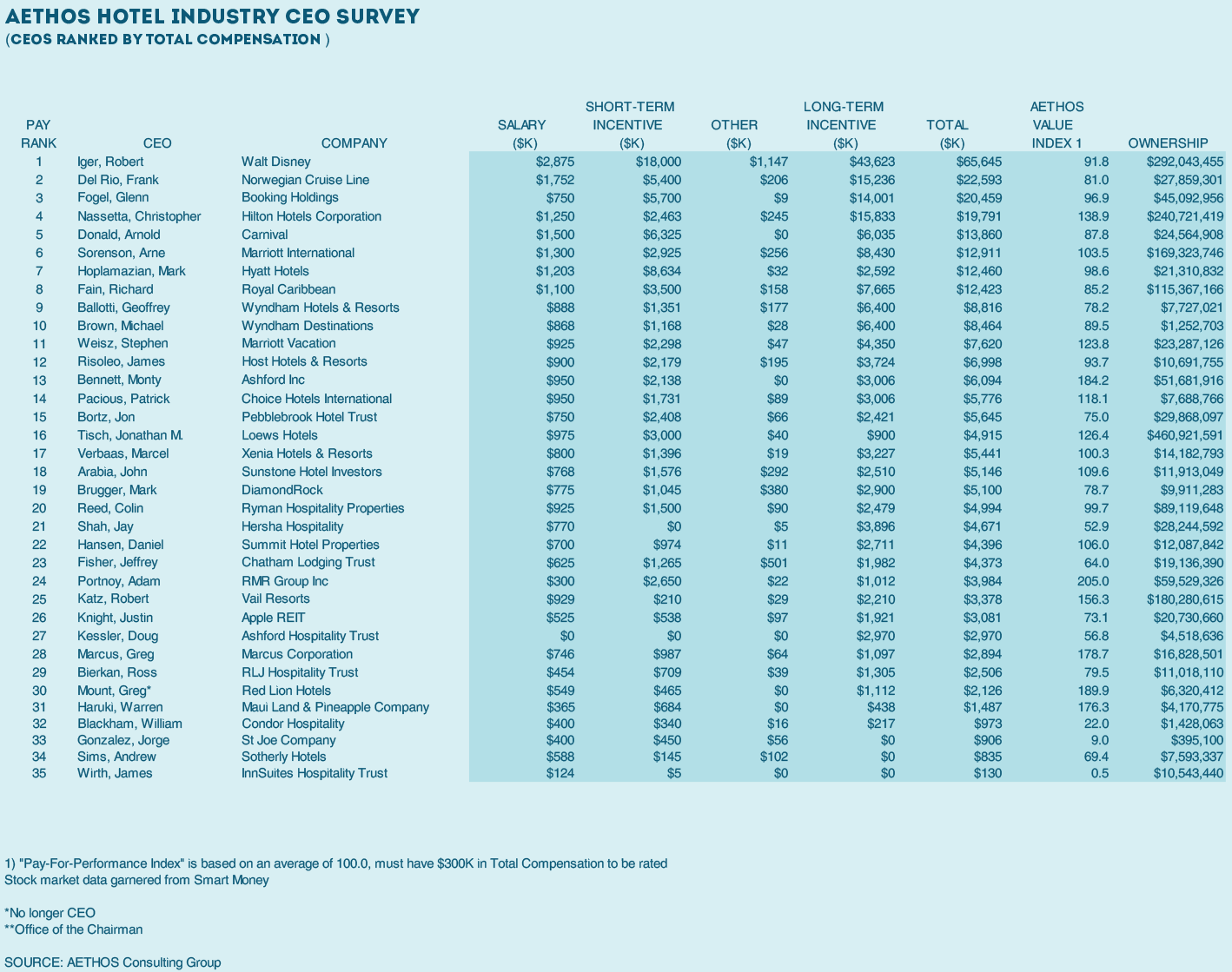