What a difference a year makes… 12 months ago we were talking about the impact of the Dodd-Frank Act on corporate governance; this year, Trump is talking about repealing the entire act. How should the gaming industry be reacting to the possible change?

We recommend the industry create more of their own transparency, while the government limits regulation on public companies. In our opinion, much of the Dodd-Frank Act, and other SEC regulations put in place by previous administrations, have no teeth or real impact on public company decision-making. In particular, CEO pay has been a lightning rod for zealots like Senator Elizabeth Warren; but the fact is, government has no place in how business executives get paid. That is up to shareholders of companies. That said, shareholders deserve and should demand transparent communications from company executives.

AETHOS Consulting Group has been expounding on corporate governing practices for more than a decade. Our goal has been consistent; rate gaming companies on how well they are organized, managed and communicate with shareholders. This year’s study included 27 companies that have significant business concerns in the gaming industry. The study examines board makeup, independence, committee structure and pay-for-performance in determining a governance score for each company. The evaluation was broken down into five key areas:

LION REIGNS
MGM Resorts took the top spot for the third year in a row, receiving 42 out of a possible 46 points. In particular, MGM led the industry in board diversity, committee activism, performance evaluations and shareholder communications as well as thoughtfulness in regards to board and executive pay. Next year we will also include MGM Growth Properties in our analysis as MGM spun out their real estate into a REIT.

Scientific Games captured second place with 38 points, followed by Wynn Resorts with 36. Both companies made significant improvements over last year. There were three other companies with a score of 36: Carnival Corporation, Everi and Boyd Gaming. In particular, Wynn had a very interesting year in corporate governance—with the departure of Elaine Wynn from the board and shareholder activists making waves. Founder, Steve Wynn made commitments to improve governance and it appears he is delivering on that promise. 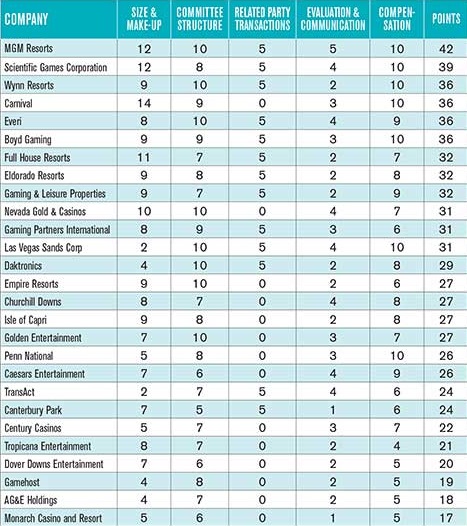 MAKEUP TEST
In determining the effectiveness of the size and makeup of a company’s board, we looked at six attributes: the total number of board members, the length of term, the characteristics of the chairman, the presence of a lead director, the ratio of insiders and outsiders on the board and the board’s diversity policy.

Total number of board members: A board should be comprised of an odd number of members between five and 11; a range that most experts consider to be optimal. We found that 13 of the 27 companies had an odd number, while a majority (14) had an even number. This seems like one of the easiest issues to correct but many still don’t seem to get it.

Length of term: All board members should be elected annually, rather than a staggered multi-year term, something that 13 companies still have not done. Staggered terms was one of the strategies for protecting boards from being voted out in mass. If boards are worried about proxy fights, there are better ways to fight injustice without causing entrenchment.

Chairman characteristics: The chairman of the board should be an independent director, plain and simple. As Lord Acton famously said, “Power tends to corrupt and absolute power corrupts absolutely.” The role of chairman and CEO are different and proper checks and balances need to be in place. Twelve of the survey group companies combined the CEO and chairman role. This is still too high a number in today’s business environment.

Diversity: Companies received points by having a formal policy around gender and racial diversity. We believe that board diversity is socially responsible as well as good for business. Very few companies in gaming had a formal policy and both a woman and minority on their board.

COMMITTEE STRUCTURE
The SEC requires public companies to have the following four committees: audit, compensation, governance and nominating. With respect to committee structure, eight companies achieved a perfect score. To receive a perfect score, the board would have had all four committees, have an official charter, be made up of all independent directors and have met at least four times a year. We also did not want to see the existence of an executive committee, whereby the CEO could effectively highjack the board.

TRANSACTIONS WITH RELATED PARTIES
This is one of the key areas where activist focus. The solution is easy, but appears to be difficult to enforce. Just look at the issues President Elect Trump is having about his business interests. We have found that most often nothing illegal is going on but it looks terrible to the public eye. And sometimes that’s all it takes for an activist investor to start a proxy battle.

EVALUATION AND COMMUNICATION
Issues concerning the effectiveness of internal board operations, director evaluation and accessibility to shareholders were measured in this section. Only MGM Resorts received a perfect score in this area. We also see constant movement in what shareholders want related to communications. Suffice to say, better shareholder communications is a must and a way to keep activism at bay.

PAY-FOR-PERFORMANCE
The final area of our survey focused on the real “hot button” for most shareholders; how the CEO and senior executives get paid. In many ways, this is what has activist shareholders and government official most upset. In our view, the key is having a well-articulated pay model that aligns management with shareholders. We encourage executives and compensation committees to weight more heavily towards “pay at risk.” Pay based on a balance of short- and long-term performance metrics is the recipe for success.

In the end, the size of the pay check should not matter as much as whether it was earned or not. We at AETHOS think many of the rules being promulgated by Sen. Warren and others is misguided. Making CEO some arbitrary percentage of the “average employee” pay check is not the entrepreneurial or American way. Risk and reward need to coexist and reward people that innovate and create real wealth.