Besides technology, the gaming industry has one of the largest percentages of entrepreneurs running their respective companies. Larger than life personalities such as Steve Wynn and Sheldon Adelson actually cast a shadow well beyond gaming. But that is changing as entrepreneurs are slowly being replace by corporate execs such as Keith Smith at Boyd, Jim Murren at MGM, Tim Wilmott at Penn and Mark Frissora at Caesars. It is interesting to see how CEO compensation has changed as this process has unfolded. Generally speaking, the entrepreneurs took more of the compensation in equity, while corporate executive appear to have a more balance approach to their compensation mix. In the end, what matters most is whether a CEO earns his or her pay, not necessarily the size of the paycheck. In an effort to analyse executive pay in the gaming industry, AETHOS developed a proprietary pay-for-performance model that allows for the comparison of disparate data points to determine if a pay package was too large or small.

In our eleventh annual study of gaming industry pay, we evaluated the performance of 36 public gaming companies to determine whether their CEO deserved his or her pay. The AETHOS pay-for-performance model compares significant financial metrics such as company size (market cap), stock appreciation (rise in stock price over 3 years), EBITDA growth (over 3 years), and total direct compensation (combination of salary, bonus, LTIP & other). Our findings are illustrated in the below table: 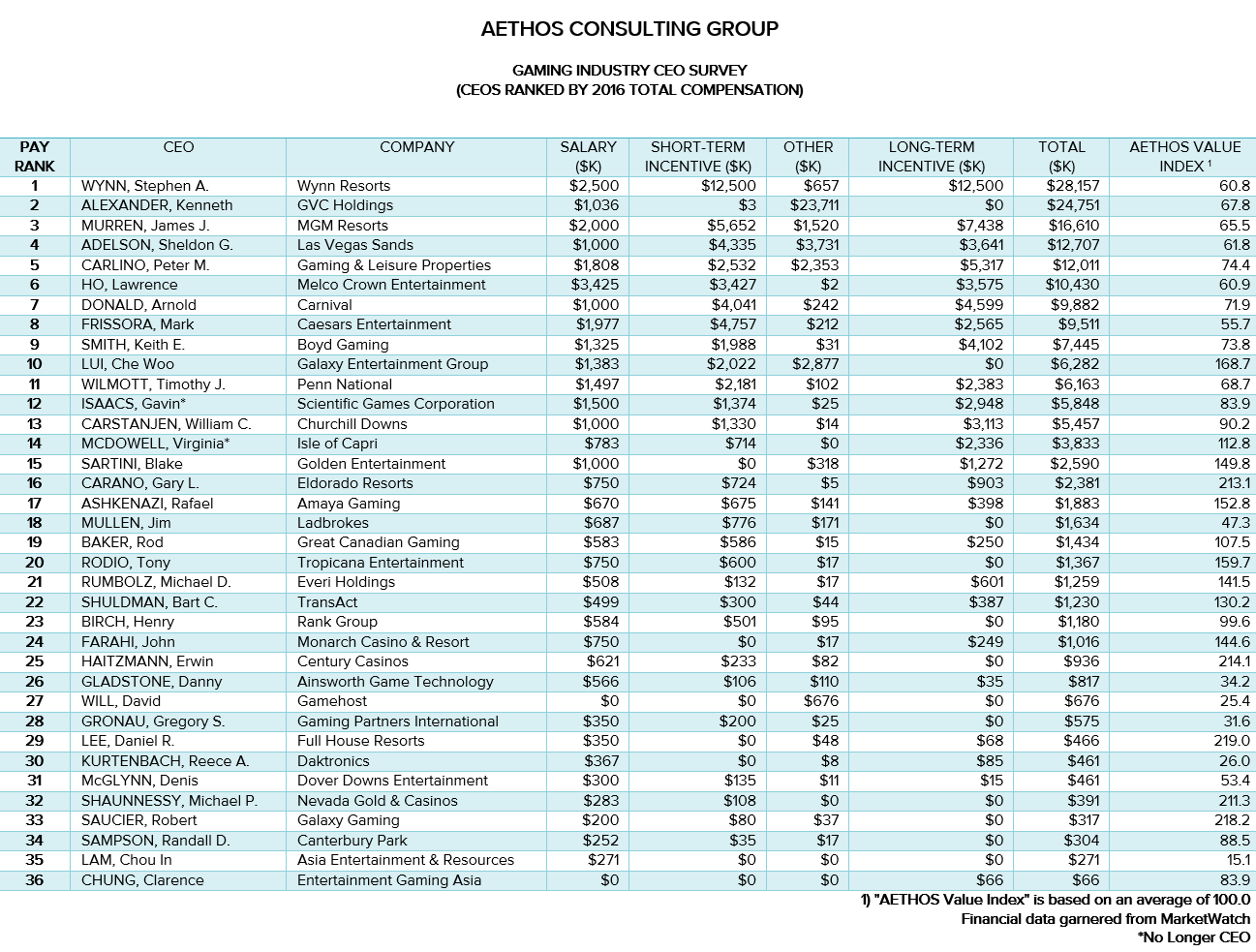 It comes as no surprise that the highest paid CEOs in the gaming industry work for the largest companies. Steve Wynn topped the list again this year as the highest paid CEO in gaming at just over $28M in total compensation. Mark Frissora at Caesars got bumped of the list by Kenneth Alexander at GVC, who received nearly $25M in pay, with most of it coming in the form of “other compensation”. Rounding out the top five highest paid CEOs included Peter Carlino at Gaming & Leisure Properties, James Murren at MGM Resorts, and Sheldon Adelson at Las Vegas Sands.

In total, 24 of the 36 CEOs made more than $1M in total compensation. The same number as last year. The average CEO paycheck in 2016 went up by $100K to just over $5M. Unlike last year, this group of CEOs had an AETHOS Value Index (AVI) below 100, indicating that they were generally overpaid relative to their company performance. It appears that some of the small cap companies out-performed their larger peers especially in stock price for the first time in many years. Not surprisingly, the top performing CEOs base on our AVI were all running small cap companies. The best CEO on a pay-for-performance basis was Dan Lee, CEO at Full House followed by Robert Saucier at Galaxy Gaming and a host of other small cap CEOs.

Fourteen CEOs in the gaming industry received a base salary of $1M or more. Lawrence Ho and Steve Wynn had the largest salaries, with the average salary for 2016 coming in at just over $900K. As most bonus programs are tied to base pay, it comes as no surprise that many of the most highly paid CEOs also received the largest bonuses in 2016, with Wynn leading the group with a bonus of $12.5M. The next largest bonus was Jim Murren at $5.65M and then Frissora, Adelson and Arnold Donald at Carnival receiving upwards of $4M. The average CEO bonus in 2016 was $1.5M, rising another $100K from last year. Seven gaming CEOs received no bonus at all in 2016. Chalk that up to a rash of takeovers, new CEOs and poor performance.

The largest component of CEO compensation was long-term incentive plans (LTIPs). A sign that pay-for-performance is strongly entrenched in the industry. The average LTIP value in 2016 was nearly $1.6M. Steve Wynn topped the list with his $12.5M stock grant, matching his annual bonus this year. Thirteen CEOs received an equity grant worth over $1M, while twelve received nothing at all. This is odd as best practice companies tend to dole out smaller annual grants rather than loading up every so often.

Who are the richest CEOs in the gaming industry based on their company stock ownership? Four billionaires include Lawrence Ho at Melco Crown, Dr. Lui at Galaxy Entertainment Group, Sheldon Adelson at LVS and Steve Wynn. A number of other centimillionaires hit our list including Peter Carlino at Gaming & Leisure Properties.

Gaming continues to become a mainstream investment option for most portfolios and a way to bet on the house for people who don’t really like to gamble. As an industry, Hotels, Restaurant & Leisure was a top ten performing group up nearly 25% over the past 12 months. The CEOs in the casino space deserve some credit for bringing their stocks to main street and institutional investors.