– Entrepreneurship – Crowdfunding – Consumer Behaviour –
Having recently returned from the European Foodservice Summit in Zurich I was reminded of the fact that the restaurant sector is one where entrepreneurs are still able to challenge the ‘big players’. Creativity and innovation are thriving and those that are willing to take risks are being rewarded by customers who flog to those new restaurants in search for ‘the next big thing’. London, it seems, remains one of those global ‘hot-spot’ for up-and-coming restaurants. Robin Rowland, CEO at YoSushi! described the city’s food scene at the conference as “unique, sizzling and exciting”.

Reflecting on this on my way home to the UK, I decided to connect with Corrado Accardi. Corrado is one of those London entrepreneurs who took the plunge and who left a corporate career in order to become the founder of Pizza Rossa, a by-the-slice Italian eatery. I was keen to talk to him about entrepreneurship and leadership, financing a start-up and the challenges represented by changes in consumer behaviour as well as his views on industry disruptors – in particular third party delivery companies – and social media. Not wanting to stereo-type, but Corrado’s passion and love for food shun through in our conversation and it consequently went on for a while. Here is the first part of his story: 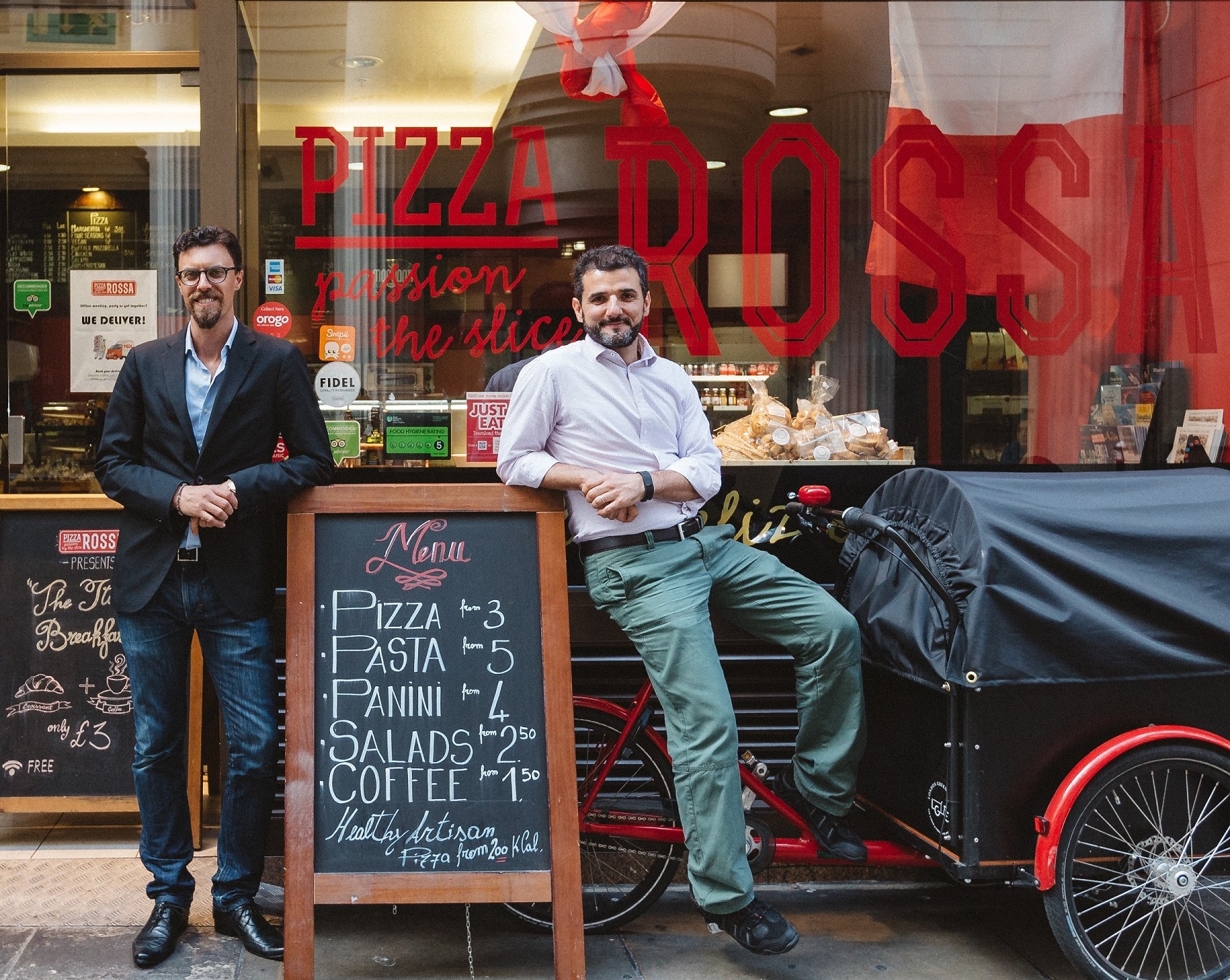 Corrado, you are an engineer by background – what inspired you to start your own restaurant business? Yes, I initially built a career in construction and project management with AECOM and Gardiner & Theobald across Europe – so nothing to do with restaurants! I subsequently developed Adina Aparthotels in Germany and later decided to obtain an Executive MBA from London Business School – the idea was to move into real estate finance but I quickly realised that this was not my thing! During my studies, though, I honed in on entrepreneurship and an idea which had been festering for a long-time suddenly appeared feasible. When I moved to London 15 years ago I had always difficulty in finding a good, quality lunch place like you would find in my home country. The ones that I liked were in the wrong locations. So I saw an opportunity in the restaurant business and started working on a more concrete business plan for a scalable, Italian-inspired quick service restaurant concept.

The European Foodservice Summit labelled “Burgers, Pizza and Sushi” as the three pillars of the (fast) casual dining segment. You yourself have chosen to develop an Italian restaurant concept and opened the doors to your first Pizza Rossa in 2014 – can you tell us a bit more how this came about? Well, I am Italian – from Sardinia – so food-wise I really did want to stay close to my routes! But jokes aside, there is actually more substance behind it then that – I saw a market gap in the UK for a quality, healthy Italian grab-and-go restaurant concept. Capitalising on a central kitchen would ensure consistency in product quality and I’d be able to use retail rather than dedicated restaurant units, thus saving on rent and fit-out costs and facing less competition from the ‘big guys’ in the restaurant scene (‘rent’ and ‘access’ are certainly key issues in highly competitive markets such as London). First, though, I had to fix the problem in producing fresh pizzas off-site for on-site consumption without affecting quality of the food by reheating it. I took a course in pizza making back in Italy and then did some undercover work in a pizzeria with a by-the-slice concept (as well as a lot of research by eating out!). I then amended and perfected the process to generate more scalability of production and spoke to countless restaurateurs – on the operator and owner side, as well as those in catering and food production. A couple of years down the line, having found the right partners to work with and after a lot of sweat and tears, Pizza Rossa’s first outlet in Leadenhall Market opened!

Starting a business from scratch can be daunting – talk us through some of the challenges you faced. Challenges there were certainly plenty – but I would say my top three centre around the topics of:

For example, at the beginning I spent a lot of time talking up investors. Yet, securing funding was extremely difficult and banks requested guarantees which would have broken my neck! Luckily for me, crowdfunding had started to make some headlines. I decided to give it a go – I did not want to give away a big slice (and hence control) of my company to one single shareholder. But I was happy to give very small portions of the business to a lot of different individual shareholders! Shareholders, who would have a personal vested interest in spreading the word for Pizza Rossa… Having put together a video pitch and an award-winning business plan, we launched it on CrowdCube and secured GBP £440,000 in only 17 days – a record across Europe for a start-up for equity-based crowdfunding (watch the original video here).

I would also rank “cultural differences” as one of the bigger obstacles that we had to overcome. For example, our second site in Moorgate, which was only a takeaway joint with four stools altogether, had massive problems at attracting more clientele than the ever present Italians and it really did hit us hard. It came down to UK consumers being unfamiliar with the concept of a healthy and light by-the-slice pizza concept for takeaway as a lunch option. Mostly, the Brits eat pizza in the evening or at the weekend and, as a consequence, more likely than not in a social context – so they regard pizza as a sit-down meal. But if you go for by-the-slice pizza, it tends to be for fast consumption. Brands such as Domino’s and PizzaHut are certainly market leaders here but theirs are a lot heavier pizzas – so our consumers were confused when they were served our healthy pizza starting from 200 calories per slice. This all resulted in us doing only 30% of our business from takeaway and 70% from eat-in customers – but this had a massive negative affect on our turnover and clashed with our business model which was centred around a quick-service model with fast turnover and making most of our money through takeaway in the approx. 1-2 hours of “lunch rush hour”. Rectifying the problem was thus a question of educating the consumer about our product and the concept and reframing our focus to encompass the market of the large corporate deliveries.

Lastly, there is the question of how you stay relevant in such a dynamic sector as the restaurant business. We operated for a while a kiosk in London’s Shoreditch and served our food at a festival – we even did a trial with Roadchef motorway service areas. All this formed part of a continuing exercise to push boundaries and find out what works where and how. Over time, we also questioned ourselves whether or not our limited menu might deter repeat customers – would they continue coming back without a broader choice of food items? We have now gradually introduced new items such as pasta, risottos, paninis and salads – and we have even introduced full main courses into our menu. Whilst this helps us to keep on attracting a large enough and diversified clientele, it poses in itself another challenge: Our USP includes the control of every single aspect of the production process, allowing off-site preparation but on-site consumption without compromising quality. So we put a lot of effort and research into making sure that we can live up to that expectation!

For their book “The Loneliness of Leadership”, my colleagues Keith Kefgen and Jim Houran, Ph.D., have interviewed industry CEOs to reveal many of the unspoken lessons for leadership success. It appears all of them have had in some shape or form a ‘personal board of advisors’. Did you seek out similar support? Yes, most definitely – doing it on my own would have been a very different experience. Right from the very beginning I was fortunate enough to have had a lot of support. When I wrote my business plan I most definitely used my wife as a sounding board – she has a business mind and an investment banking background. She was – and still is – one of the first people I run ideas by. However, I should also mention Luca Magnani – Pizza Rossa’s co-founder! Luca has a background in sales, marketing, branding and media – we complement each other quite nicely! Dan Einzig, an early supporter of the business, added branding expertise. Then there is Robin Walker, a seasoned executive with a ton of experience in food management/production, Ruy Ribeiro, a banking and investment professional who now runs his family’s network of restaurants in Brazil, Alberto Bonetta, a former colleague from the London Business School and high flying executive with focus in the Far East – all three sit on the board as non-executive directors and are adding a lot of value. I have learned a lot from their past successes and mistakes. There are of course also numerous individuals and faculty from London Business School who have formed part of my personal ‘advisory board’ – all of them were keen to help and I really did have a lot of access to their brains and thoughts!

In your opinion, what are the most rewarding things about being an entrepreneur and business leader? And, how do make sure to choose the best team to surround you with? Starting to see the business picking up and how customers are accepting and embracing your new concept is extremely rewarding. Also, one of my restaurateur career ‘high-points’ was when we did the catering for an event with approximately 2,000 people in the City of London – this was a big win for the business but also a massive logistical challenge organised in just over 36 hours. In the end, everything went smoothly and it was down to the team that we were so successful. It is when I see things like that happening, when I notice that the team has pulled through and overcome challenges on their own that I feel most proud. For me, successful leadership means that you have created an environment in which staff is equipped with the right knowledge, tools and attitude and when it is empowered to deal with tough situations on the spot. Every successful team wants to feel that it is able to contribute something tangible to the business – so I see it as my responsibility to foster creative thinking. In fact, a lot of our new menu items come directly from ideas suggested by our front line staff members! But, how do I make sure that I choose the right staff to surround myself with? For me, it is down to attitude, gut-feeling and shared values. One of my business partners, Luca Magnani, is in fact the brother of one of my wife’s best friends and a guy with huge corporate experience and a great willingness to put it on the line to start something new. We never really connected upon until that serendipitous day when at a kids’ party I told him about my idea and he got it straight away. The reason why we work as a team is that we share the same vision and attitude towards business!