Casinos & Corporate Governance (as published in the Casino Journal, Jan ’18)

The gaming industry is one of the most regulated businesses in the world. With a colorful past, the industry has gone to great lengths to earn a reputation as “squeaky clean”. But has that translated to the board room and corporate governance in general? We think so. Casino Journal and AETHOS Consulting Group have been analyzing board practices for more than a decade; rating gaming companies on how well they are organized, managed, communicate with shareholders and pay themselves and executives. This year’s study included 26 companies that have significant business concerns in the gaming industry.

The study examines and distributes points in five categories:

MGM Resorts took the top spot for a four year in a row, receiving 38 points. In particular, MGM led the industry in board diversity, committee activism, performance evaluations & shareholder communications. Interestingly, MGM Growth Properties, the MGM spinoff only received 27 points and has a way to go to match its parent organization. Penn National jumped to second place with strong upward trends in board makeup and executive pay practices. Rounding out the top five boards included, Everi, Gaming & Leisure Properties and Wynn Resorts. 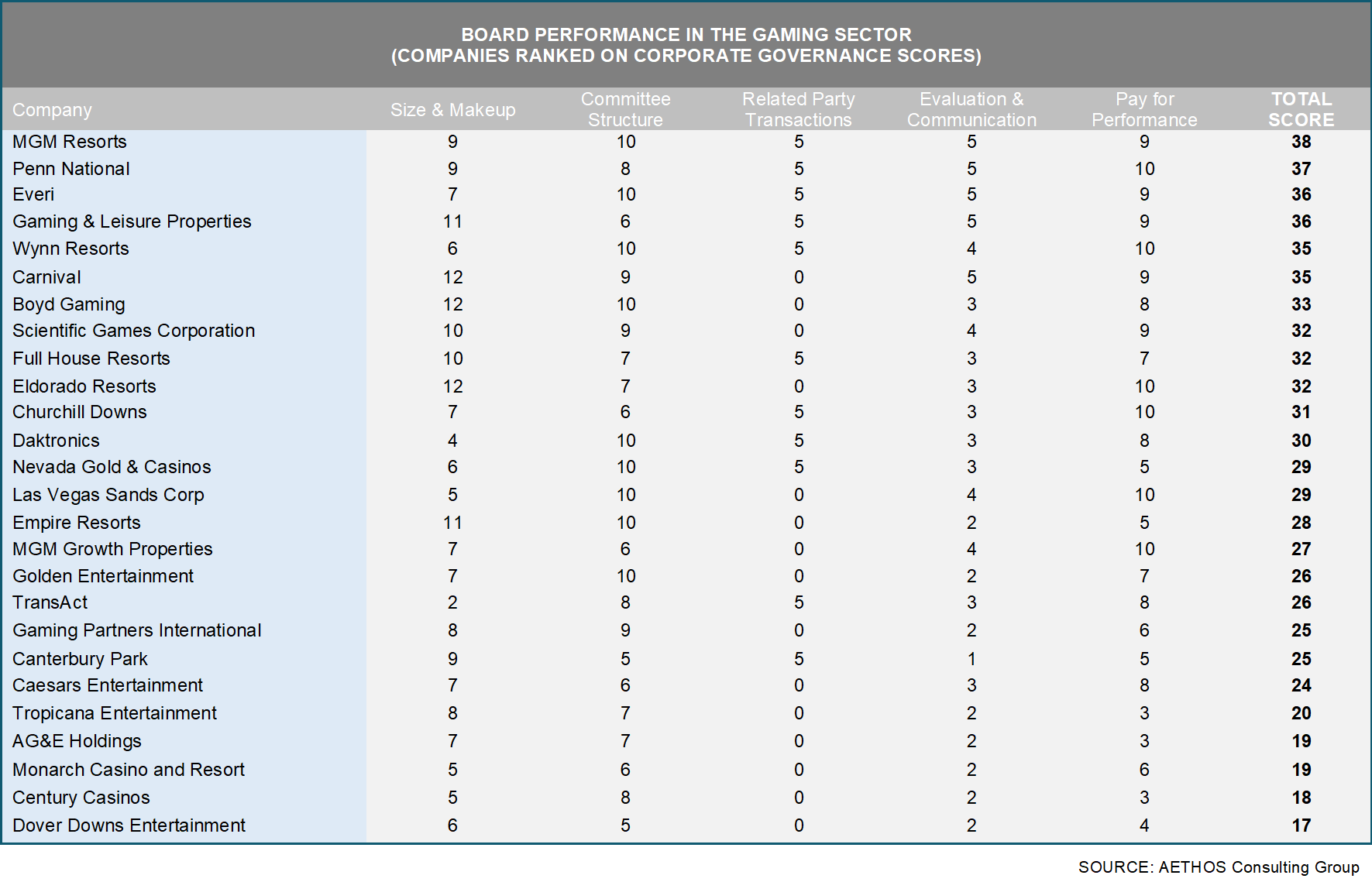 In determining the effectiveness of the size and makeup of a company’s board, we looked at six attributes: total number of board members, length of term, the Chairman’s background, the presence of a lead director, ratio of insiders and outsiders on the board and the board’s diversity policy.

Total Number of Board Members: A board should be comprised of an odd number of members between 5 and 11; a range that most experts consider to be optimal. We found that 15 of the 26 companies has an odd number; still leaving 11 companies outside the norm in this area. Why more companies don’t fix this is hard to figure.

Length of Term: Board members should be elected annually, rather than a staggered multi-year term. Staggered terms has been a strategy for dealing with activist investors. Unfortunately, it also allows directors to get entrenched and complacent when it comes to activism. Twelve companies had multi-year terms or nearly half of the industry. This is another easy fix if shareholders demanded it.

Chairman Characteristics: In today’s environment, the Chairman should be an independent director. There is only one reason why a CEO wants to be Chairman, and that is the consolidation of power. Our democracy is based on the balance of power, and when that is out of kilter, bad things can happen. Chairman and CEO responsibilities are just different and should be treated as such. Nineteen (19) gaming companies out of the 26 surveyed had an Inside Chairman role. We suspect most of these companies will have an Independent Chairman proposal in their proxies next year.

Lead Director: When a board allows an insider to be Chairman, they should at least appoint a Lead Independent Director. Nine of the 19 companies with an inside Chairman had a lead director. A step the other 10 should be thinking about.

Diversity: Companies received points by having a formal policy around gender and racial diversity. We believe that board diversity is socially responsible as well as good for business. Only MGM, Carnival and Boyd met all of these criteria.

The SEC requires public companies to have the following four committees: audit, compensation, governance and nominating. Nine (9) companies achieved a full score in this area, meaning they had all four committees, have an official charter, were made up of all independent directors and met at least four times a year.

If you want to sit on a board, don’t do other business with the company. This rule should be easy to follow, yet 15 gaming companies had some form of related party transactions.

Issues concerning the effectiveness of internal board operations, director evaluation and accessibility to shareholders were measured in this section. Five companies received full scores in this area compared to only MGM Resorts last year. The best way to have keep shareholders happy is to communicate with them.

The final area of our survey focused on how the CEO and board gets paid. This is the issue that the media loves to focus on. In reality, most gaming companies are doing a good job in this area. More transparency about how a gaming CEO gets evaluated and paid is very apparent. Many gaming CEOs make considerable amounts of money, but they also run large, highly profitable business. The real issue shareholders should be focused on is the measurement metrics for pay not just the amount of pay.