The restaurant industry has been hit especially hard by COVID. Layoffs, closures, a shift to delivery and outdoor dining, as well as mergers and acquisitions have dominated the news this past year. Many executives and even board directors have taken pay cuts during this health crisis. We also have seen restaurant boards in the news over the last several months. For example, in March 2021, Mellody Hobson will become the first African American Chairwoman of the Board of a Fortune 500 company – Starbuck – which is long overdue.

There was a tie this year for the best board between Red Robin and Starbucks, earning an impressive 42 out of 46 possible points. Finishing second was a tie between Fiesta Restaurant Group, Jack in the Box, and McDonalds. Also deserving kudos are Brinker International, Darden Restaurants, Dave & Busters, Domino’s Pizza, and Yum! Brands which all finished with 40 points. 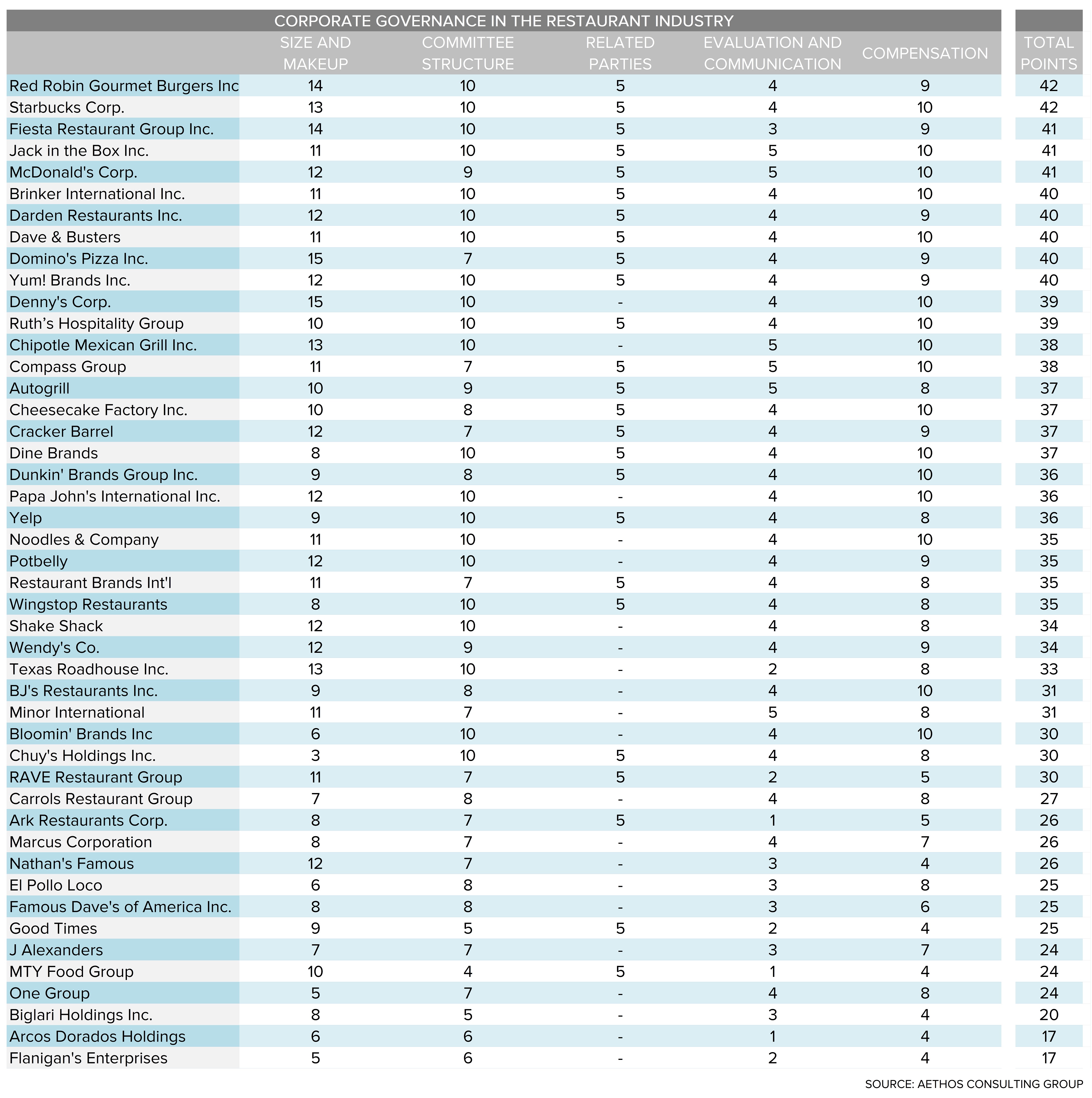 In determining the effectiveness of the size and makeup of a company’s board, we looked at six attributes: total number of board members, length of term, the Chairperson’s background, the presence of a lead director, ratio of insiders and outsiders on the board, and the board’s diversity policy.

Total Number of Board Members: A board should be comprised of an odd number of members between 5 and 11; a range that most experts consider to be optimal. Exactly half (23 of 46) of the companies we measured fell within this range.

Length of Term: Having staggered board terms is a governance no-no. Each board director should stand for re-election annually. The only reason to have staggered terms is to prevent proxy battles with investors. Not the best way to build a relationship with the owners of a company. Restaurant companies have made progress on this front over the last several years as only fifteen (15) companies have multi-year terms.

Chairman Characteristics: Most governance experts believe that the Chairperson and CEO roles should be separated. In today’s environment, the Chairperson should be independent of the company and a balance to a strong CEO. The separation of powers is a cornerstone of our democracy and it should be the same for public companies. The restaurant industry has made some improvement in this area as twenty-one (21) companies had an independent Chairman. Ten (10) companies continue to allow the CEO to serve as Chairman of the Board, a characteristic that is hopefully in the way out. Of the top 10 highest rated companies in our study eight (8) had an independent Chairperson while two (2) did not.

Diversity: Companies received points by having a formal policy around gender and racial diversity. Beyond being a social responsibility in today’s environment, it is just good business practice. A diversity of background and opinion can only help in board meetings. Thirty-three (33) companies had multiple diversity Board members while five (5) still had zero.

The SEC requires public companies to have the following four committees: audit, compensation, governance, and nominating. The committees should have official charters, no Executive Committee, and be made up of solely independent directors. While Executive Committees are meant to act quickly when decisive action is needed, oftentimes they serve to circumvent larger Board input on key decisions. Just twenty-one (21) companies scored perfectly on all these metrics.

Issues concerning the effectiveness of internal board operations, director evaluation, and accessibility to shareholders were measured in this section. Much like our next section, we like to see companies study the competition to make sure shareholders are happy, feel engaged, and are confident in board strategy. Only seven (7) companies scored perfectly in this category. Very few public restaurant companies conduct yearly independent evaluations of board performance, so members do not get too cosy in their roles – or too close to the Executives they are supposed to keep tabs on.

The final area of our survey is a hot button topic, CEO and Board pay. So much has been made about the inequality of CEO and the average worker. Dodd-Frank regulations now require companies to delineate CEO pay ratios and Say-On-Pay votes. In our opinion the issue is not about how much CEOs get paid, it is about whether they earned their pay. Many of the companies in our survey did a much better job of articulating pay philosophy and being transparent with pay metrics and amounts. Most boards used outside parties to assist in analysing executive and board compensation and overall pay strategies.

Investors can argue about the amount executives get paid but they can no longer say they are in the dark when it comes to pay. Additionally, we like seeing larger percentages of Executive Compensation in the form of Long-Term Incentives to tie executive (and board) compensation to company and stock performance. Most boards seem to be heeding our recommendation. Sixteen (16) companies scored a full ten (10) points in both Board and Executive Compensation categories, while an additional eight (8) falling just one point short of full credit.

We commend the industry for the improvement in corporate governance and suspect that these issues will continue to be omnipresent for investors and regulators. It also signifies that the restaurant industry is getting interest from more sophisticated investors and activists. No doubt the pandemic will impact the valuation and viability of many companies and concepts. What we do know that the companies at the top of our performance list have the leadership and system in place to weather the storm.