The latest shaming of US CEOs appears to be in the form of the Dodd-Frank CEO Pay Ratio initiative. Groups like the AFL-CIO are using this topic to rationalize the disappearance of the middle-class. Their most recent analysis puts the average CEO pay at 361 times the typical worker ($14M to $39K). This will continue to be a sore spot for income equality proponents. But think about CEO pay in relation to athlete pay. Floyd Mayweather made over $275M last year for a couple of exhibition fights, while Lionel Messi made $101M for playing soccer and endorsing sneakers. Super Bowl winning QB, Tom Brady made $34M in salary, bonus and endorsements last year. Yes, CEOs make a lot of money. Yes, some of them don’t deserve it. But the answer is in better compensation administration, not government regulation. Will the CEO pay gap create economic instability or unsustainability? We think not.

What we have found over the twenty years of studying CEO pay, is that the many public boards did a poor job at linking CEO pay to company performance. In fact, that was the goal of creating our pay-for-performance model. The AETHOS Pay-for-Performance Model analyses key financial metrics such as market capitalization, stock appreciation, EBITDA growth, and total direct compensation. What did we find in last year’s hotel industry pay practices? That most CEOs were paid appropriately, with a few outliers. 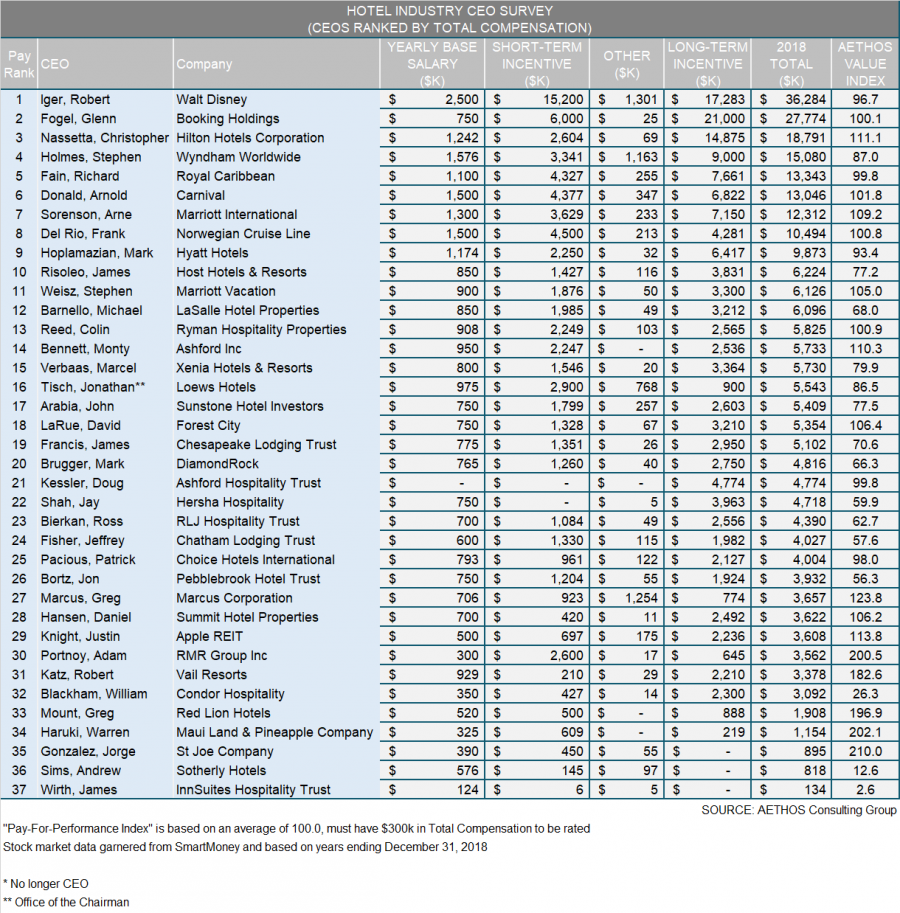 The market capitalization of our peer group ranged from Walt Disney’s colossal $167B to InnSuites’ paltry $22M. Comparing CEOs from two vastly different companies might appear difficult, but that is precisely what the model intends to do. In fact, it illustrated that Bob Iger at Disney generally merited his huge $36M pay-check, while James Wirth at InnSuites barely deserved his $134K pay-check. In the end, investors want stock performance not payroll containment.

As in previous years, the highest paid CEOs in the industry ran the largest companies. The top ten CEOs each earned more than $10M, with Bob Iger topping the list at $36M. Glenn Fogel at Booking Holdings racked up nearly $28M and Chris Nassetta at Hilton earning just under $19M. Although their pay packages were significant, all of these CEOs had an AETHOS Value Index (AVI) over 85; 100 would be a perfect pay-for-performance match. This year’s top performing CEO based on the model was Jorge Gonzalez at St. Joe Company with an AVI of 210. A big swing for Gonzalez who has been stewarding St. Joe through some very difficult times.

Eight CEOs in the hospitality industry received a base salary of $1M or more. Bob Iger topped the list with a salary of $2.5M, followed by Frank Del Rio at $1.5M. Many of these same CEOs received hefty bonuses, with Iger taking home a $20M bonus, followed by Fogel at $6M. The largest disparities between salary and bonus belonged to Adam Portnoy at RMR $300K salary to $2.6M in bonus, and Fogel at a salary of $750K to his $6M bonus. Interesting to see so much of their pay is at risk.

Like the CEOs in the Fortune 500, long-term incentives plans were a significant portion of overall CEO pay in the hotel industry. Most LTIPs were in the form of restricted stock grants and to a lesser extent, stock options. The largest stock grant went to Fogel, with a value at just over $21M. Thirty CEOs on the list had multi-million-dollar grants, which comprised a majority of their pay. We are also seeing more of the LTIP awards having performance vesting attached to them. A strong sign that compensation committees are doing a better job of tying pay and performance.

Although I believe that most income equality advocates miss the boat, fair pay is a real issue. For starters, minimum wage needs to increase. Our industry is a beckon for first-time job-seekers and we should do are part to keep them. Secondly, more employees should be included in bonus programs. If the CEO can earn millions in bonus pay, managers should be able to participate. Finally, many argue about the effectiveness of equity pay at lower levels of the org chart, but that is the fastest way to get employees thinking like shareholders.