According to a 2017 report from the Economic Policy Institute on CEO pay, chief executives at the largest 350 public companies in the United States made US$15.6 million on average in 2016 — 271 times what the typical worker earns. In the hotel industry the average total compensation for a public CEO was US$5.7 million or about 100 times more than the typical worker. Should hotel CEOs be criticized or praised? We think it’s a combination of both, but you might be surprised who gets criticized and who gets praised.

What we have found over the 20 years of studying CEO pay, is that the size of the paycheck matters less than whether or not it was earned. We think CEOs should be paid based on whether they out-performed their peers or not. Using our proprietary pay-for-performance model, we have evaluated the performance of 37 CEOs in the hotel/leisure industry. The AETHOS Pay-for-Performance Model analyses key financial metrics such as market capitalization, stock appreciation, EBITDA growth, and total direct compensation. 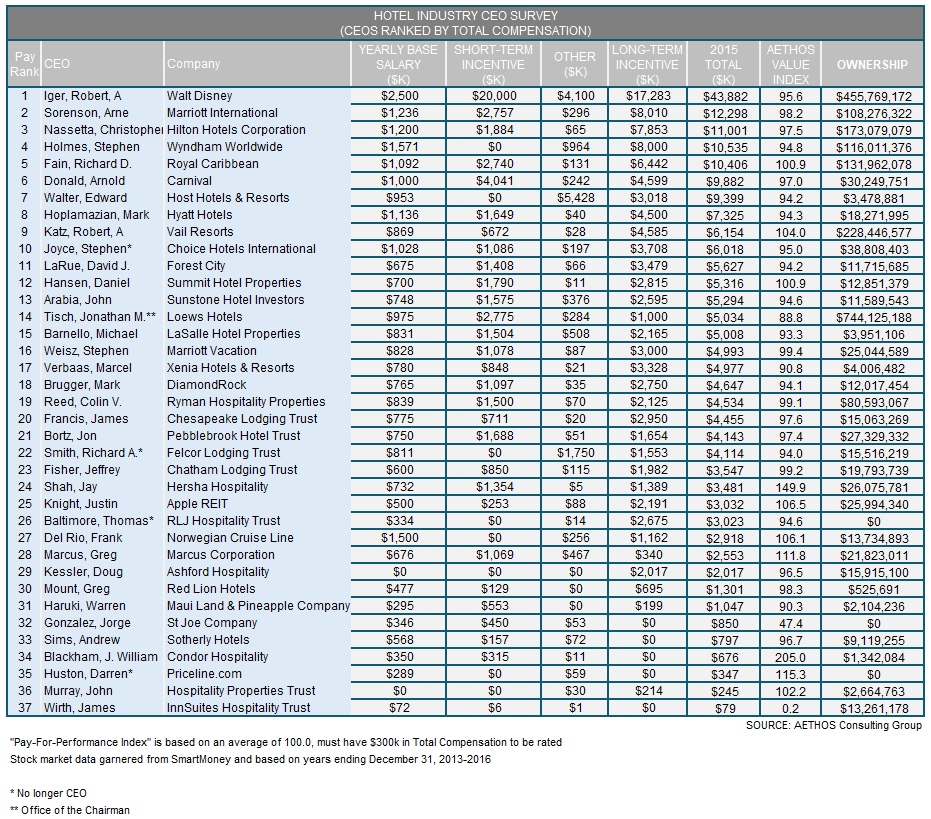 The market capitalization of our peer group ranged from Walt Disney’s colossal US$168 billion to InnSuites’ relatively paltry US$19 million. Comparing CEOs from two vastly different companies might appear difficult, but that is precisely what the model intends to do. In fact, it illustrated that Bob Iger at Disney generally merited his huge US$44 million paycheck, while James Wirth at InnSuites barely deserved his US$79,000 paycheck. Big in this case is not always bad. In fact, investors would have been wise to invest in Blue Chip companies like Disney, Marriott and Hilton instead of companies with low paid CEOs like InnSuites, St. Joes and Maui Land.

As in previous years, the highest paid CEOs in the industry ran the largest companies. The top 10 CEOs each earned more than US$6 million, with Bob Iger topping the list at US$44 million. Arne Sorenson at Marriott pulled in over US$12 million, and Chris Nassetta at Hilton earning just over US$11 million. Although their pay packages were significant, all of these CEOs had an AETHOS Value Index (AVI) near 100; exactly where they should be. This year’s top performing CEO based on the model was Bob Blackham at Condor with an AVI of 205.

Nine CEOs in the hospitality industry received a base salary of US$1 million or more. Bob Iger topped the list with a salary of US$2.5 million, while NCL paid Frank Del Rio US$1.5 million. Five of the big hotel chains and the other large cruise lines paid their CEO a seven-figure salary ranging from US$1 million to US$1.6 million. Many of these same CEOs received hefty bonuses in 2016, with Iger taking home a US$20 million bonus and 17 others receiving a US$1 million or more in bonus pay. This makes sense as most CEO bonus programs are pegged to financial performance.

In addition to bonuses, long-term incentives plans (LTIPs) were a significant portion of overall CEO pay. Most LTIPs were in the form of restricted stock grants and to a lesser extent, stock options. The largest stock grant in 2016 went to Iger, with a value at just over US$17 million. Interestingly, 27 of the other CEOs on the list had multi-million dollar grants as well.

We are seeing more CEO LTIPs in the industry have performance metrics tied to their vesting rather than the simple passage of time. This means a significant portion of these stock grants have to be earned through on-going performance. Gone are the days when a CEO could earn a huge paycheck by just hanging around.

We still believe that CEO pay is largely driven by “supply and demand” issues rather than greed. It is incumbent upon investors and board directors to monitor executive pay in a manner that focuses on long-term performance, general leadership skills and peer reviews like the one above. Only then will people stop complaining about the amount of a paycheck and focus on whether it was earned.