As published by Hospitality Upgrade Magazine in its Summer 2019 issue

Assisted by our increasing willingness to share information about ourselves, and facilitated by an exponentially rising computing power, the existence of data is omnipresent. Its proliferation and general availability are hereby not dwarfed by our, as of late, heightened awareness as it relates to privacy and data security. More interestingly, and despite tighter rules and regulations that address those concerns, experts predict that we all will willingly provide, and will benefit from, analytics based on more data, not less. Here is where “Artificial Intelligence” (AI) comes into play, because through its superior performance and ability to look at data and data patterns, it allows for much improved processing power and insights.

Broadly speaking, artificial intelligence is defined by the English Oxford Dictionary as “computer systems able to perform tasks normally requiring human intelligence.” It can be put to good use and can be applied in a plethora of different industries and functions. Logistics, supply chain management, sales, marketing, research and development as well as consumer insights have all already benefitted, in some shape or form, from AI. Cutting edge industries are typically those associated with “big money,” such as banking, insurance, manufacturing and retail as well as the travel and tourism sector, to a much smaller extent. The latter is of particular focus here because we are aiming for guidance and recommendations for hospitality owners and operators on (1) whether or not they should invest into AI and, if so, (2) which areas AI can add the most value.

A Case Study In The Value Of AI

A recent McKinsey study identified that, across 19 key industry segments, AI has the potential of creating an additional USD $3.5 trillion to USD $5.8 trillion in annual value for the global economy. Specifically, for the travel and tourism sector, this figure is estimated to be potentially USD$400 billion to USD$500 billion. With that in mind, it is not surprising to learn that, according to an earlier McKinsey study, leaders in the travel and tourism are anticipating an 11% increase in AI spending over the next three years. Therefore, it appears that the question should not be if, but what pitfalls to avoid and in which specific area hospitality organisations should invest in and adopt AI platforms.

One of the biggest pitfalls for organisations is to spend money and set up an AI infrastructure but not be able to use the outputs or insights gained – based on either incorrect avenues pursued that yield in irrelevant or difficult-to-use data points or based on a lack of in-house skills to “make sense” of the AI outputs. Understanding how “digitally mature” an organisation is and how ready its employees and executives are to implement “data science” should, consequently, be one of the first assessments one undertakes when looking at applying AI within an organisation. So, before taking out the cheque book, it is important to ensure alignment between the AI strategy and overall business strategy, as well as alignment between the AI strategy and the in-house capabilities. The high-level SWOT analysis shown below can further assist in assessing risks before officially “greenlighting” AI investment. 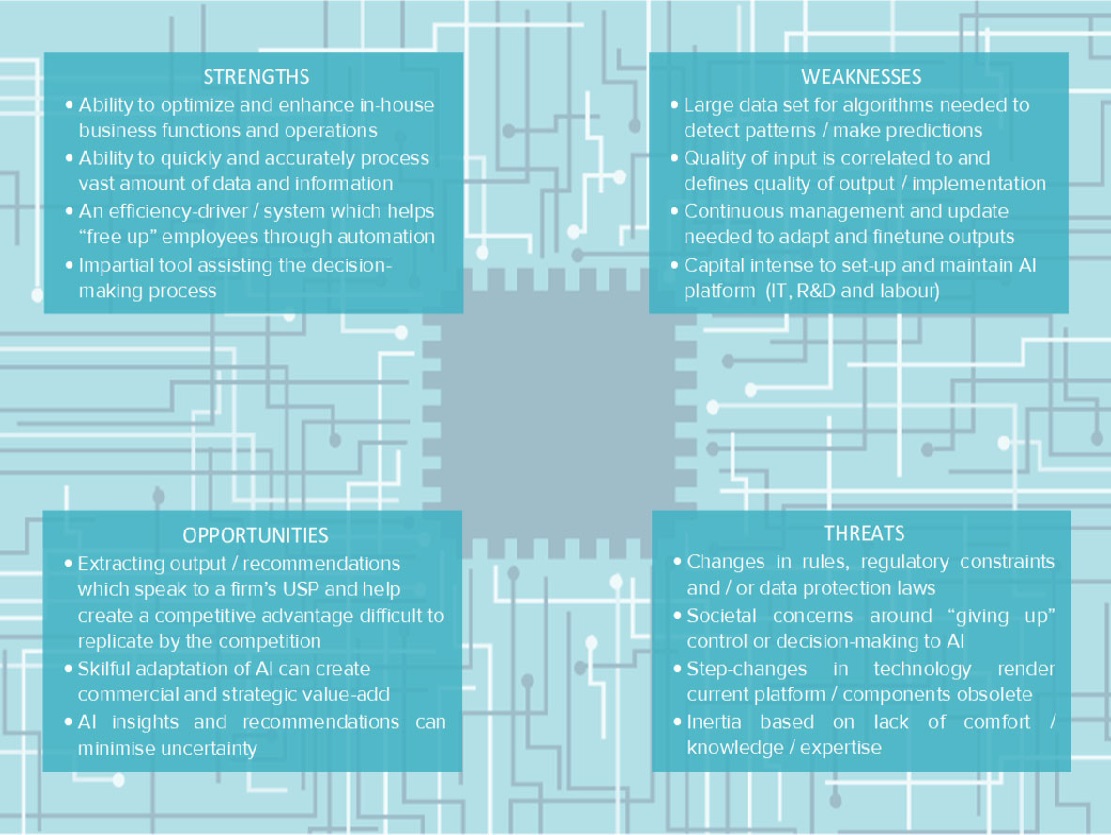 AI – Breaking It Down

In those instances in which a company has opted, in principal, to “up its game” from a technology perspective, the priority should shift to identifying which areas might offer the biggest upside potential and/or competitive advantage. Broadly speaking, the application of AI can be grouped into three subsegments:

Looking at data points that cluster past behaviours and preferences of customers, for example, will be helpful to the sales and marketing departments of an organisation – in fact, this practice is already being used quite successfully within the hospitality industry. The same holds true for systems that help predict future performance and the price sensitivity of an organisation’s key target markets and customers (think yield or revenue management). To push the boundaries and gain a competitive advantage, the travel and tourism sector should instead consider investing in Prescriptive AI. And, given the fact that the industry is a people-driven and labour-intensive business, organisations might want to consider applying Prescriptive AI for the benefit of its Human Resources and Talent Management department. In most instances, it would probably be the first time that this specific department would have received so much attention from the C-suite.

Looking ahead – A new Best Practice to Leverage AI in HR and Talent Management?

According to one of the earlier mentioned McKinsey studies, the potential value creation of AI platforms within HR is estimated to reach approximately USD $100 billion. Mostly, experts predict the value creation to come from increased productivity and efficiencies. However, imagine a scenario in which organisations are bolder than that, going beyond work flow automation and labour planning. Based on numerous conversations that AETHOS has had with hotel and restaurant operators and cruise ship companies, for example, there is a clear lack of successful, innovative and fully integrated talent management and succession planning programs. Using just this small component of the HR tool box as an example highlights how much room for improvement there is. To date, a lot of travel and tourism companies complain that they have no detailed overview of their global talent pool, for example – this is to say, who and where are the employees who have been earmarked as “top talent.” In fact, most companies even struggle to come up with a clear, cohesive and common set of competencies that qualify employees to be identified as “top talent” in the first place. Additionally, given the sheer size of most hospitality organisations, their global nature and (typically) decentralised HR functions, companies are struggling to define, recommend and put in motion truly ground-breaking career paths for their employees or to coach executives on the areas that will help them to become better leaders.

AI could change all of that. Ideally, using data that identify and map past and present “peak performers,” identify and track their career paths and combining it with data gathered from the literally hundreds and thousands of interviews that are conducted on an annual basis within these organisations, could help set benchmarks for success. Alongside the previously stated, AI could integrate insights from psychometric assessments, performance reviews, individual development plans and 360-reviews, for example, to paint a much clearer picture of an organisation’s “talent health.” The output from the AI system could range from detailed training programs based on the successful methods identified elsewhere in the organisation to specific recommendations in terms of career paths to take to equip a particular executive with the skill sets needed to excel at a particular, however nuanced, challenge.

An AI platform as such would create a truly unique competitive advantage for an organisation, because, although the technology platform itself might somehow be replicated by competing firms, the inherent value of the system itself would lie in its highly tailored HR and talent management recommendations based on something distinct to the organisation itself, its employees and the organisation’s institutional knowledge. Hospitality companies committed to implementing such an AI platform, and curious enough to find application in the HR and talent management department, would be wise to keep in mind this last piece of advice. Focus on the first mile (i.e., identify and organise the right data) as well as the “last stretch” of the journey (i.e., define how to use the output and how to integrate it from a management point of view).