The 8th annual study of board practices and performance in the lodging industry determined that Four Seasons was the best in market. It was the second time Four Seasons topped the list of publicly traded lodging companies. The last two years have seen significant transition in the areas of corporate governance and executive pay. Shareholders are expecting accountability and transparency like never before. For the most part, lodging companies have been listening to shareholding and industry experts and have made their boardrooms less clubby and more about work product. Interestingly, there were twelve new companies in our study with many new REITs added, a few real estate companies and two cruise lines. Forty-four companies were included in the survey and ranked in four key categories:

Some of the criteria were modified in response to evolving market conditions. For example, we deducted points for the presence of an executive committee and the linkage of chairmanship with the CEO. Nearly 30% of the survey group still had an executive committee and 42% allowed the CEO to be chairman. We gave extra points for having a lead director (a designated director that can call special meetings of the outside board members). Furthermore, we gave an additional point to boards that required directors to purchase stock in the company. Four companies in the survey group appointed lead directors and eight required directors to buy stock in the company. The following are some further trends we observed:

Governance experts believe that the optimum number of board members is between 5 and 11 depending on the size and complexity of the business. An odd number is preferred so that votes will never end in a tie. The number of insiders to outsiders is an important distinction, as the SEC is requiring a majority of outside directors on the board. In fact, many experts think that the CEO should be the only insider on the board. The top governance companies also had an outside chairperson, and had one-year terms. By having one-year terms, directors stand for reelection each year. Priceline and Sunstone were the only companies to get perfect scores in this category.

There are four committees that experts believe must be present to constitute a quality board. They are: Audit, Compensation, Governance and Nominating. Every lodging company had an auditing committee but interestingly 3 did not meet at least quarterly. We find it difficult to understand how an audit committee could not meet prior to each quarter’s financial statement release. Only Hospitality Properties Trust did not have a compensation committee, although nearly half of the group did not have quarterly meetings either. Most of the governance and nominating committees were combined and again nearly half did not meet often enough according to governance experts. As we stated previously, 14 companies still had some form of an executive committee. This must change, as the executive committee is a simple vehicle for a headstrong CEO to control the board.

The investment community continues to “call out” companies that allow interlocks (you sit on my board and I will sit on yours) and insider participation (directors doing business with the company). The potential conflict of interest is so obvious that it is amazing how rampant this behavior is. For example, ILX rented office and warehouse space from a company controlled by the CEO’s family. The company also was involved in a land transaction with another board member and lent money to another closely connected company. Although most companies state that these types of transactions were done at “market value”, it is hard for investors to verify.

Probably the hottest topic in the last couple of years, executive compensation continues to be a sore spot for investors. Huge golden parachutes and in some cases pay-for-nonperformance, has the SEC and investor groups changing the way in which executives are paid. New SEC regulations are requiring entirely new reporting on executive compensation. Shareholders are now going to have more involvement in approving pay programs and packages. DiamondRock was the first company to ever get a perfect score in this category. We hope that many others will follow their lead. Four Seasons was the top performer last year and was the winner for the second time. As Four Seasons is going private, they will unfortunately no longer be in the survey group. That leaves the top spot for a new player in 2007. 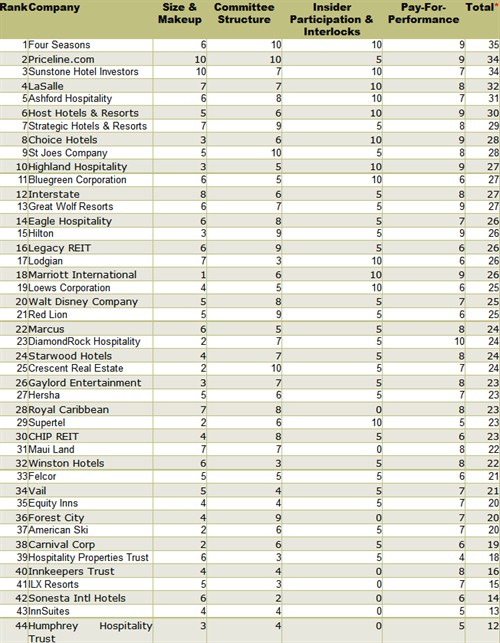