The 9th annual study of board practices and performance in the lodging industry determined that Starwood Hotels was the best in market. This marks the second time that Starwood has topped the list of publicly traded lodging companies. The last few years there have been tremendous changes in the area of corporate governance and executive pay. We have seen new laws put into effect that have changed the ways from the “crony boards,” where board rooms of publicly traded companies were filled with friends or family members of CEO’s, to laws for “independent” boards where there is no tie between the company and the CEO. This year the survey said goodbye to a few companies that have now gone private (Four Seasons, Fairmont and a number of REITs) and added Morgans Hotel Group. Forty-one companies were in the survey and they were ranked in four key categories:

This year only 24% of the survey group had an executive committee and 40% allowed the CEO to be chairman. These are reductions from last year but still to high in our opinion. Some other trends included:

Governance experts believe that the optimum number of board members is between 5 and 11 depending on the size and complexity of the business. An odd number is preferred so that votes will never end in a tie. The number of insiders to outsiders is an important distinction, as the SEC is requiring a majority of outside directors on the board. In fact, many experts think that the CEO should be the only insider on the board. The top governance companies also had an outside chairperson, and had one-year terms. By having one-year terms, directors stand for reelection each year. Last year we had only two companies getting a perfect score in this category. With new laws taking effect and much more scrutiny, we now have five companies with perfect scores Priceline, Disney, Eagle, Morgans and Lodgian.

There are four committees that experts believe must be present to constitute a quality board. They are: Audit, Compensation, Governance and Nominating. Every lodging company had an auditing committee, but just like last year, there were three that did not meet quarterly. Our newcomer Morgans was the only company that did not have a compensation committee, and 35% of the existing companies did not meet quarterly. We suspect that Morgans will constitute a committee, as shareholders demand oversight. The trend of combining Governance and Nominating committees has become prevalent with almost all of the companies. However, according to governance experts most still did not meet as often as they should have.  As reported before, 25% of the peer group companies had an executive committee, a number that will likely continue to decrease in the future. Six companies had perfect scores in this area.

Interlocks (you sit on my board and I will sit on yours) and insider participation (directors doing business with the company) are not as common as they once were, most likely due to stricter SEC rules that call for “independent” board members. Only seven companies had interlocks or insider participation. This section will probably become eradicated in the near future as the SEC and shareholders become more cognizant of board member activities.

Here is one topic that investors, as well as the media, will continue to cover with great interest. Changes in SEC reporting rules have made it clear that executives were being paid more than previously reported. No company had a perfect score in this area but many including Hilton, Marriott, Host and Choice were close. Vast improvements have been made by the industry to be transparent when it comes to executive pay, after all, the industry has been providing shareholders with tremendous returns over the last few years and we see that continuing. The key factor is to be transparent and allow shareholders to make informed decisions when it comes to their investments. We also encourage the industry to think about the link between pay and performance, because no one will begrudge people for making big money as long as they earn it. 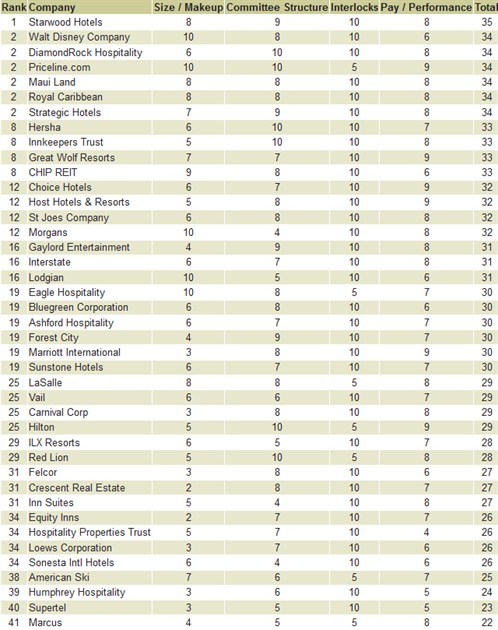