Millennials (aka “Generation Y” or “Echo Boomers”) are the talk about town. A day rarely passes without a new report explaining what this generation wants out of life and how their value set are economic and cultural disruptors. As consumers and employees, GenY is therefore fast becoming the focal point of marketers, as well as cultural, religious and political leaders. Everyone is talking about how to “win over” this precocious generation. Of course, this is really an old question, which arguably gained prominence from a seminal study conducted back in 2009 by Boston College’s Sloan Center on Aging & Work. Their investigators examined the career priorities of GenY compared to GenX. The study, still available online today, found that Gen Y employees valued access to flexibility for work and family responsibility, whereas GenX employees looked for training and development opportunities and having supervisory roles. Most pundits today likewise continue this nearly 10-year narrative that GenY is all about career choices that emphasize work-life balance, sense of purpose and social consciousness, and that these attitudes differ markedly from previous generations.

However, several complications undermine a clear understanding of what millennials actually want. Careful review of the literature shows that although many studies suggest important generational variances, other research has found little to no meaningful differences. At least two issues likely contribute to this mixed picture on GenY. First, work-life balance, technology and social consciousness are simply a subset of a larger group of variables and priorities job seekers contemplate in their employment deliberations. The most accurate investigations of generational differences are therefore those that consider a wide range of potential factors. Secondly, studies often confuse attitudes with intentions – and it’s important to understand that the two are not synonymous, as an individual’s general attitude towards an issue turns out to be a poor predictor of actual behaviour.

Marketers have known about the distinction between attitudes and intentions for decades thanks to the pioneering work in the 1970s by social psychologist Martin Fishbein. He developed a well-validated model of behaviour called the “Theory of Reasoned Action (or Planned Behaviour).” According to this model, a person’s behaviour is determined mainly by an intention to perform the behaviour. Intention is the cognitive representation of a person’s readiness to perform a given behaviour and is the sole immediate antecedent of behaviour. Thus, it is a hallmark of the theory that only specific attitudes toward a behaviour or the issues in question predict that behaviour.

Conversely, it is unrealistic to expect other general attitudes to consistently predict specific behaviours. For instance, to predict attending church at location X, it is not very useful to use “religiosity” as a predictor. Instead, it is far more productive to assess a person’s attitude toward the behaviour of attending this church at a particular day and time. In other words, qualifying survey and research questions by providing a specific context bolsters the predictive validity. As a result, what we have been told about millennials as consumers and employees might be significantly tainted by studies that focused on asking about their general attitudes, as opposed to their behavioural intentions.

Asking the “Millennial Question” in a New Way
Our survey focused only on GenX and GenY for the sake of simplicity, and given that these two generations form the majority of the global workforce. Following the logic regarding attitude versus intention, we asked carefully-screened, survey respondents across industry sectors from GenX (n = 256, 70% women) and GenY (n = 254, 67% women) to rate a diverse set of career priorities. The sample skewed towards North America (75%), while the other quarter represented Europe and Asia-Pacific. Priority ratings did not significantly correlate with either gender or geography, so only generational differences were considered in our analyses. Finally, the age parameters that defined GenY and GenX matched those used in the 2009 study by the Sloan Center on Aging & Work – Gen Y (b. after 1980) and Gen X (b. 1965-1980).

Participants were not forced to rank-order the list of priorities, as this method (or “ipsative” approach) often imposes artificial “structure” on data and consequently can produce statistically false results. Instead, we worked with a paid research panel to ensure our respondents were matched on group size and behavioural intentions, (all participants were those who either were recently hired for new jobs or were actively considering job offers). In other words, ratings of career priorities correlated to actual deliberations of job and career choices, as opposed to ratings derived from respondents’ general attitudes.

Participants were instructed to, “Keep in mind your most recent job/role change (or specific job offers you are actively considering now) as you consider and rate the importance of these variables in your decision-making process. Please rate every variable in the list.” Each respondent then rated a list of twenty (20) job or career priorities using a 1 to 4 scale: (1) No importance at all, (2) Very little importance, (3) Some importance, and (4) Strong importance. The list of 20 job/career priorities was created in an iterative, consultative manner using an academic literature review combined with discussions with actual job-seekers and seasoned executive search professionals.

Two Significant Findings
Table 1 compares the hierarchies of weighted averages for GenY and GenX across the set of 20 career/job priorities. 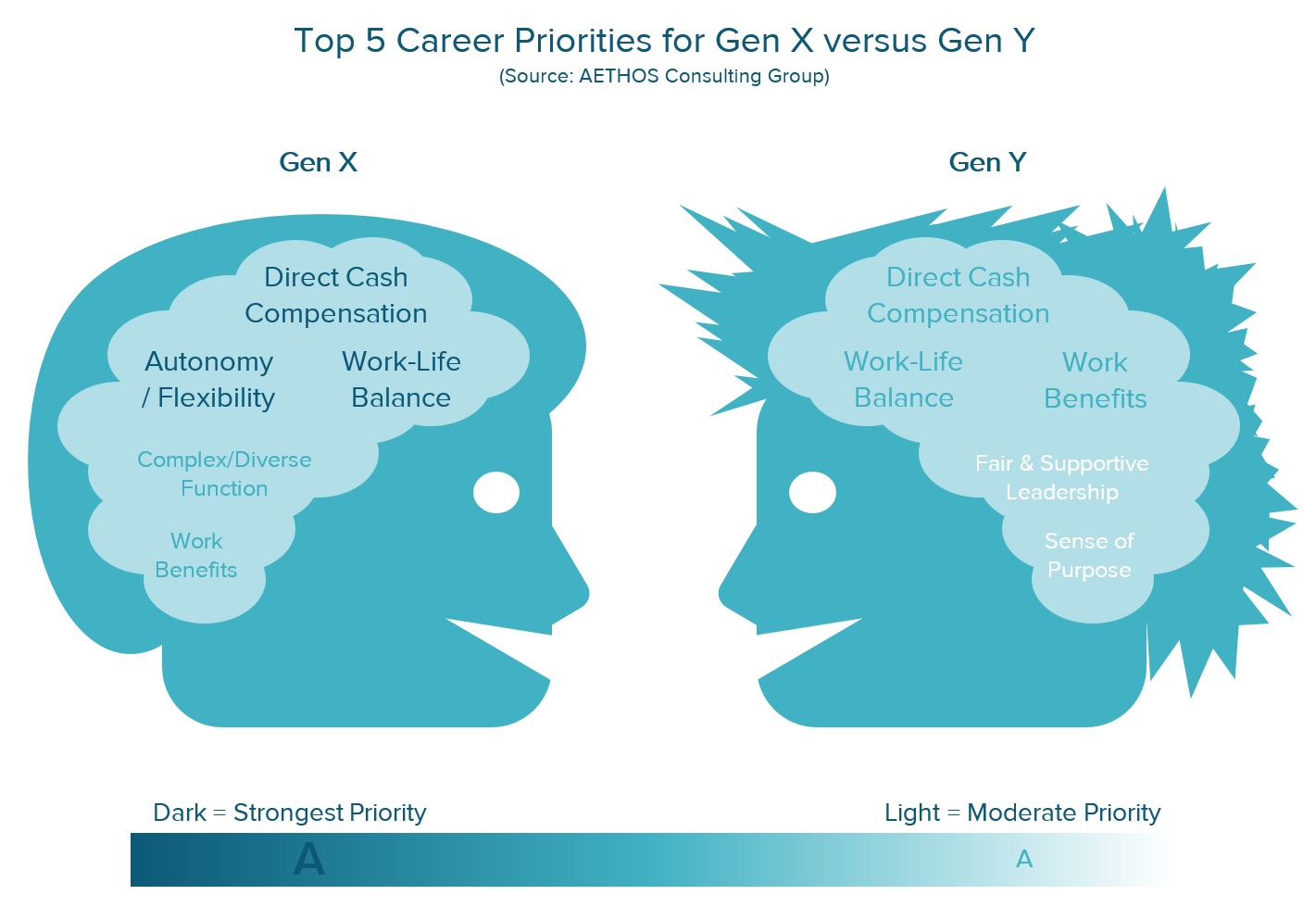 Advice for Leaders when Gaining and Retaining Talent
Knowing that the vast majority of new hires and internal promotions will likely come from GenX and GenY, it is incumbent upon hiring authorities to understand the practical uses of our findings. First the nearly decade-old assumptions of GenY versus GenX seem to require critical revisions. Individuals are consistent and predictable in their priorities when making actual decisions to accept new roles or jobs. Simply put, Millennials are not different than their GenX counterparts.

Rather than being unique to a specific generation or psychographic segment, today’s workspaces and careers are progressively “boundaryless” and unfold outside traditional organizational structures. This has allowed personal values to evolve such that people – and especially GenX – increasingly change work settings for greater autonomy, life balance and meaning in work. GenX shows rigidity in their priorities, whereas GenY seems more flexible when seeking the same priorities. This flexibility can allow employers to be more nimble and creative in the terms of job offers and the conditions of a given workplace. This flexibility is the new dimension in employment.

From previous research for our book, Loneliness of Leadership, we found that the most effective modern leaders are ones who tolerate ambiguity, show flexibility in thought and action, and anticipate rather than fight changing business conditions. It is understandable why companies are striving to hire Millennials, as they have these traits in spades. However, both GenY and GenX hold very similar priorities when it comes to employment. Employers should consider this when hiring knowing that the challenge will likely come when negotiating terms and conditions for employment. Expect GenX to be the “divas,” and GenY often less so.

Finally, keep in mind that subtle variations in these ratings occurred both within and across GenY and GenX. Perhaps this is the most telling trend of all. It suggests that there are risks when generalizing about the characteristics of any group or segment of individuals. Categorizing and treating individuals in a homogenous fashion like GenX versus GenY ignores the fact that we are dealing with unique individuals. In particular, we know that the rise of the lifestyle concept shows that hotel businesses recognize and attempt to deliver on a personalized guest experiences. Yet, it is odd that this identical philosophy is not uniformly applied to a company’s own employees, who are in effect its internal customers.

The best talent, regardless of generation, strives for the same general outcomes in a role, although the strength of expectations varies by professional maturity. The disrupting force of GenY is perhaps best regarded as an urgent wake-up call for organizations again to start thinking and treating team members as highly-valued individuals, with a focus on understanding their idiosyncratic motivators and then devising new and innovative platforms that best leverage their aspirations to keep them personally and professionally engaged.